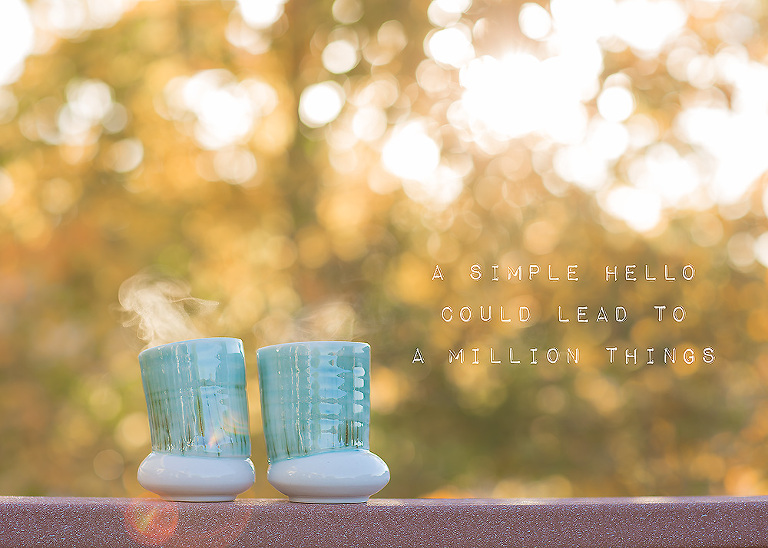 For months, these life elements have been at the very top of my heaping piles of endless other thoughts…other thoughts of any mother in her late thirties, I suppose.  You name it…dinner ideas, kids activities, life dreams, tackling that 10 pounds, and that constant thought of really needing to trim our dachshunds long toenails.  Yet, “connection” and “meaningful conversation” keep finding their way to my inner thoughts in an unavoidable manner.

In the last few months, I’ve begun a bit of journey in my heart.  Technically, I think it started last year when I was pondering taking this year off from my photography business, but at the time I didn’t really know that what I was feeling would be the start of this journey.  I’ve said it before but without a doubt now, I know that I thrive on connection.  I think we all do really.  I’ve just finally realized how much I crave it…daily.  Connection makes the most ordinary day the most fulfilling day.  And, as I get older, I have high expectations for each day…it OUGHT to be fulfilling…there’s no reason why it shouldn’t be.

A few moments have transpired in the recent couple of weeks and particularly, over this weekend, that have me astoundingly shaking my head.  Connections and meaningful conversation, right?  THOSE topics have been dancing in my noggin for months.  I went to our church service on Saturday evening and, as for the sermon topic??  Yes, “meaningful conversations.”  Pastor Keith has indeed taken on the topic of meaningful conversations.  Of course he has…go figure, right?  Not only is he talking about it, but he also introduces a girl named Jeni, a resident artist at the Archie Bray.  Jeni, new to Helena, only a short time ago sat in on one of Pastor Keith’s recent sermons, which led to her meeting him for coffee, which led to her proposing a challenge/project serving the purpose of connecting a community.  As for the project?  It is called Cups of Conversation.  Let me explain…

Jeni beautifully crafted ten sets of coffee cups, each set contained in an equally beautiful wooden container (crafted by another remarkable artist named Gwen) that are to travel on a journey for the next thirty days.  Each recipient of the set shall, within 24 hours, invite someone they do not know well to share a drink and share a meaningful conversation before passing the cups along to someone else.  After hearing the challenge, I had two thoughts on my mind.  One, I was so tickled to see someone push forward with a simple idea to actually make it happen.  So often, we are plagued with fears of failure and logistics that we sit on worthy ideas that sadly, never surface.  THIS was the result of the opposite…I have a deep sense of pride for someone I don’t even know personally…not to mention the inspiration I feel to begin tackling the projects brewing in my own noggin.  And as for my second thought…if I were to have those cups, who would I choose to join me??  This followed with an urge to whoop and holler and cheer loudly over the simple yet inspirational thrill of the entire project…but to the disappointment of those around me who may have been entertained by the notion, I opted to contain myself…mainly, for sake of not embarrassing Mr. Hatten.  I left the congregation hall with a wavering and aimless walk and stirring thoughts…and like a pretty healthy tug though, I walked by and grabbed one of those sets of cups.  I thought to myself “I’m doing this…why not?”  Friends, I’m not easily sold on things, I’m not.  My mother has been attempting to talk me into using essential oils for well over a year and continues to share with me the endless uses for them…and I’m still ignoring her.  But, this project?  I believe in it.  And I believe it has some serious potential to open doors.  And you know, it just seemed right…I have, after all, been plugging and pondering “meaningful conversation” for months now.

I went home.  I entertained some ideas.  There were three persons on my list of possibilities.  Two ladies whom I do not know very well and whom I have been intrigued by during the course of this year.  And my third choice…“my best friend from college.”  Seemingly crazy idea of a choice, considering the project, I know.  I’m supposed to pick someone I don’t know very well…and then proceed to have a meaningful conversation.  But, you see, we WERE very close…in college.  Then came our twenties.  Life just happens and life seemed to do just that.  It happened.  Not without some sadness that goes along with change, our friendship just kind of ended.  At the time, I remember it feeling like she moved on.  Yes, my heart hurt and yes, there were times I was pegged with insecurities.  HOWEVER, particularly where I am today, I recognize that there’s a difference between being in one’s twenties and being in one’s late thirties.  Certainly some pretty significant differences.  Mainly being…growth.

Following the sermon on connection, the Cups of Conversation project, and following a heap of internal deliberation during a family movie night of watching “Christmas with the Kranks,” (random, I’m aware) my mind was made up.  I chose her.  I chose a good friend from my past whom I haven’t had a meaningful conversation with in over a decade.  I chose her because it just seemed right.  And with the invitation via a short series of text messages that evening, we scheduled it.  We scheduled a “Cup of Conversation.”  Most importantly, at the end of these few, yet powerful notes we shared, I was left with an unexpected well of tears when she said this:

“See you then and know that I love you.”

I cried.  I cried because THAT is connection.  And THAT is God’s whispers and guiding nudge.

(These cups are about to embark on a powerful journey…I feel it.  It’s only just beginning but I encourage you to follow along at www.facebook.com/cupsofconversation.  Better yet, ask someone outside YOUR circle to sit with you for a meaningful conversation.  Your heart will thank you later for it.  Oh, and I’d love to hear about it.)